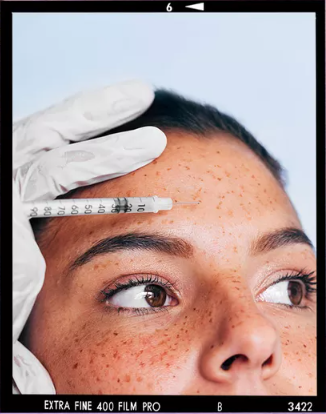 As much as we love anti-aging cleansers, toners, moisturizers, and serums, there’s no denying that, at a certain point, over-the-counter products might not cut it if the overall goal is to avoid the appearance of fine lines and wrinkles. After all, hyaluronic acid and retinol can only do so much. Fortunately, injectables like Dysport exist to take anti-aging efforts to the next level.

Never heard of it? Here, you’ll learn everything there is to know about the anti-aging injectable, including what it is, where it’s used, and what to expect before, during, and after treatment.

According to Dr. Joshua Zeichner, the director of Cosmetic & Clinical Research in Dermatology at Mount Sinai Hospital in New York City, Dysport works by reducing the activity of the treated muscles, preventing the overlying skin from folding on itself and creating wrinkles. While he says it’s best used for moderate to severe wrinkles between the eyebrows (medically referred to as Glabellar lines), the brand’s site says it can be used to treat the forehead and neck as a whole.

Additionally, cosmetic dermatologist Dr. Ava Shamban points out that Dysport can be used as a medical treatment for cervical dystonia—an involuntary muscle contraction (read: tic) that leads to a twisting of the neck and lower limb spasticity in children and adults.

According to cosmetic dermatologist Dr. Michele Green, Dysport goes beyond delivering immediate improvement to the appearance of fine lines and wrinkles. She says that it can also be used as a prescription treatment for non-wrinkle-related benefits.

“It can also be used to treat axillary hyperhidrosis (increased sweating) in the [armpit], and to [perform] a Nefertiti lift [aka a jaw-pronouncing treatment], as well as [reduce the appearance of] neck cords,” she says. “It can also be injected into the masseter muscle to decrease the strength and size of the muscle and TMJ to promote facial slimming.”

How to Prepare for Dysport Treatment

You know how hair stylists recommend you bring a photo of the hair you’re trying to achieve to your appointment? Shamban suggests doing the same for a Dysport treatment, only she recommends bringing a photo of yourself from two to 10-years-ago—especially if you’re a new Dysport patient. And as much as you may want to toast to your upcoming treatment, Shamban says to avoid alcohol for 48 hours prior to treatment, as it, too, can make you more prone to bruising during treatment. Additionally, talk to your primary care physician and find out if you should discontinue any medication or supplements that may be associated with bruising—like aspirin, fish oil, and blood thinners—before treatment.

What to Expect During a Dysport Treatment

As with any injectable, Zeichner says that patients can expect numbing cream at the start of a Dysport treatment. “With numbing creams, the treatment is virtually painless,” he says. As for the treatment itself, he says to expect several injections between and above the eyebrows over the course of 20 minutes from start to finish. “There is little or no downtime, and most people can go right back to work immediately afterwards,” he adds.

As mentioned above, both Dysport and Botox are neuromodulators—more specifically, type A botulinum. “They both work by blocking the nerves in the treated area from sending the message to the muscles to contract,” Zeichner explains. “I have found that Dysport offers a quick onset, with some people experiencing improvements as early as two to three days.” Botox on the other hand, can might take up to two weeks to fully settle in.

If you don’t adequately prepare for your Dysport treatment by nixing the advised items from your routine, bruising is very possible. Additionally, Shamban says that headaches, injection-site pain, and swelling can also occur. More often than not, however, she says the side effects dissipate in 48 hours.

In the rarest cases, Zeichner says that neurotoxin injectables can cause a drooping eyelid. “That is why it is important to get your treatment from a doctor experienced in cosmetic injectables,” he says. “The good news is that even when that rarely occurs, it is a temporary effect.”

Board-certified dermatologist Dr. Orit Markowitz backs this up, stating, “Eyelid drooping and drooling (when injected by the mouth) would be considered a worst-case scenario when injected by authentic Dysport. When you read about these aggressive side-effects (like paralysis, respiratory issues, etc.) it is because someone was injected with counterfeit products. This is another reason to always seek a board-certified professional because they would not risk their license by injecting counterfeit products.”

When your face itches or hurts, there’s a good chance your first reaction is to touch it. But, when it comes to Dysport, Shamban begs you not to. Doing so may cause the injections to settle improperly. Additionally, she says not to exercise, or get any massages or facials in the first 24 hours following treatment. And, as much as you may want to sleep it off, she says not to lay down for at least four hours after the treatment as this too can cause improper settling.

At the end of the day, Dysport is a fantastic option for folks looking to enjoy immediate results, say, before a big milestone or event. It poses virtually no major risks and requires hardly any downtime, making it an accessible anti-aging treatment for just about anyone. The two caveats are age and price. Dysport is designed for folks under 65 years of age. As for price, it’s steep. The injections typically cost between $300 and $400. But with that said, according to Dysport’s website, 95 percent of users were satisfied with only two treatments per year, and 97 percent of users thought their results looked natural.